It’s been a long time coming in fact 13 months between releases for Script Smart. The internet marketers toolbox that has lots of scripts and helpful applications to boost your sales / conversions from your website.

To this day, I personally still use this software about once a month. Usually for the email encoding script but sometimes the countdown and last chance scripts as well. And the colour wheel.

Some of the scripts that were cutting edge in 2006 have been knocked off and marketed individually over the years. I always chuckle when I see it, but they provided a solution just as I have, so I don’t begrudge them at all.

To think I initally created this software back in 2006, and it’s now in it’s 4th incarnation. I look at the videos of myself that I have on the download page and the affiliate page and I look so young and fresh. 🙂 How times have changed.

This release brings the software up-to-date with the new Adobe AIR released that have happened over the last 18 months.

Since this is a new version Script Smart 4 will install separately. You can uninstall the old Script Smart 3 version at any stage.

You can’t obviously upgrade while running Script Smart 3 using the inbuilt upgrader. So simply go to the download page (emailed to you) and install the new version.

If you require your license to be reset you can now action this on your own without needing to contact support.

This release will pave the way for some new scripts I’ve been working on adding to Script Smart in the future.

So I urge you to upgrade now, and then future minor updates will be seemless once again from within the application.

At loooonnnngggg last my unblockable exit hover popup script that is inside Script Smart is W3C compliant.

Most new websites built over the last 2 years or so, use the W3C to allow their websites to show the same way on all browsers. It makes sense to use it.

Of course the hover popup still works fine on websites that don’t use the W3C to force compliance.

The easiest way to upgrade is to just start Script Smart and it will prompt you to upgrade.

You use the hover popup in the same manner as you did before, it’s just the output script that is W3C compliant.

Thank you to all my users that have been waiting patiently for this update to Script Smart. Believe it or not it took 3 freelance web programmers and me, to get this script 100% compliant.

I’m really proud of it, because it’s the smallest size (~20KB) unblockable hover popup script with exit hover capabilities that is W3C compliant (will run on all browsers and site designs) available on the internet.

There are others on the market of course, but the nearest rival is ~120KB in size as the finished script.

Of course with higher speed internet these days around the world, the overal size of a webpage and how quickly it loads is becoming a mute point.

Clickbank Order Page Images – Are You Using Them?

Did you know that Clickbank now offer you the ability to put a product image and a title into your products sales order or checkout page? This came about in April 2008. (Clickbank didn’t find it worthy of letting anyone know, well I didn’t get an email about it and I’m on their list). Clickbank had a big year in 2008 – starting a blog, taking Paypal payments, offering to pay their users via direct debit instead of cheques and many other improvements.

But since I’ve only just realised this great feature about product images was sitting under my nose all this time, I thought I’d share this with you in case you also didn’t know.

What’s the big deal you ask? Well it’s all about presenting yourself in the best possible light to your customers. Clickbank have certainly cleaned up their order page they present on your behalf, but it’s still not your order page so to speak. You need to get as much of your info on that 3rd party order page to make it look less foreign to your buyers. (Same goes for Paypal if you use that).

If you don’t have an image for your product then I urge you to get one made at rentacoder.com or elance.com for around $20-40USD. The credibility it builds for you and ability for affiliates to use your product image in their promotions is worth it alone.

Here is a very interesting statistic and a potential source of income for a freelance graphic person – “Amazingly 27 percent of ClickBank sales pages have NO usable image whatsoever” (source).

Here’s a screenshot of Script Smart’s Clickbank order form before… You can see that I didn’t have a title of the product and it was just the default text. Not very professional at all. 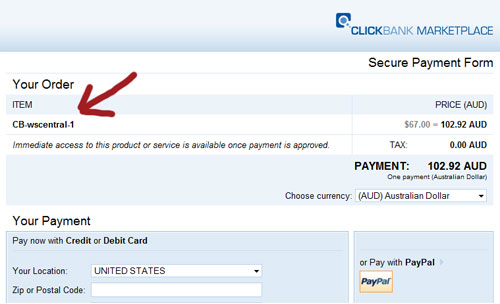 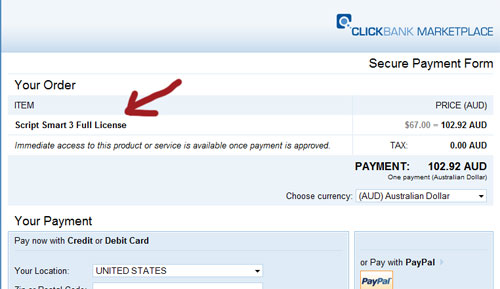 Had to wait 1 day for it to approved, then associated it with the product.

Now here’s my order form with the image in place. 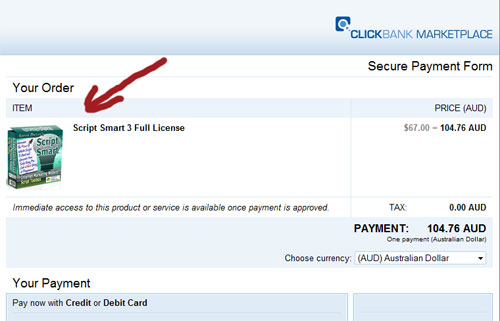 Looks so much more professional and I’m happy again.

Make sure you are making good use of this excellent feature of Clickbank.

Leave me a comment below as to your thoughts on this. Do you even use a product image to help promote your product.? I believe it’s mandatory for all products digital and physical.

Script Smart has just been updated to version 3.03

This is mostly a bug fix, but there is a major difference under the hood with this version.

So in order to get this added security software developers need to digitally sign their software to build trust and confidence with their end users.

Initially I didn’t bother with this, and installation screens used to look like this… 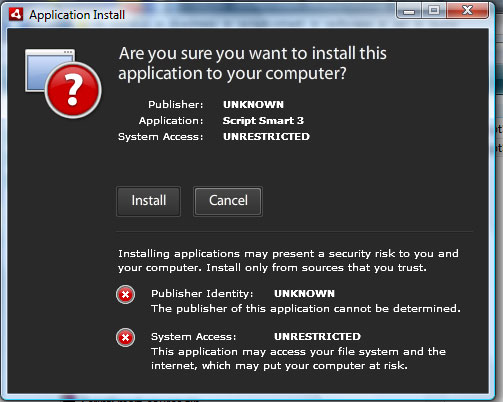 From a professional business point of view, that just plain screamed I’m a cheap and dodgey developer.

So since Script Smart 3 now uses Adobe AIR, digitally code signing an application is easy. Not cheap, but easy.

I am producing all my software in future in Adobe AIR (so far 3 products) and as such decided getting a secure digital identity for my parent company Web Smart Central as a very solid investment. 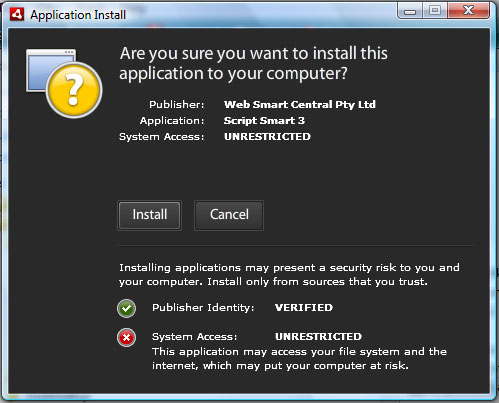 What does all this mean for you the end user. To new users it’s just normal business, to existing users, well that’s where it get’s tricky.

The new application that is signed as coming from Web Smart Central is treated a new software install from the licensing database perspective and as such Script Smart will ask you to enter your email address that you signed up with.

I’ve tried to avoid this, but alas the licensing database is now in such a mess that most of the existing users will need their serial numbers reset before they will be allowed to use Script Smart after updating.

There’s no point in putting this off, since future updates (which are coming soon) will trigger this anyway.

If you have yet to upgrade to v3.03 of Script Smart, then follow these steps…

Step 2. Click on the Install Now badge or do a manual installation

Step 3. Enter your email address that you signed up with and you should be right to go.

NOTE: Do not try to run Script Smart first and let it do the upgrade, this will lock you out and you’ll need to contact me to get your serial number fixed.

I whole heartedly appologise for this, but I have to make the software better for you in the future and this needs to be done.

If you get locked out of Script Smart during this process, please submit a support ticket, or email me and I’ll promptly fix your serial number.